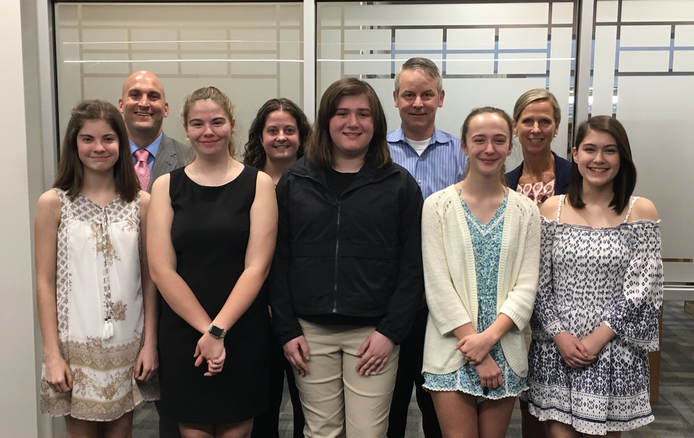 Youth Advisory Board Members (front row): Sydney Urbaniak, Chloe Endreszl, Nina Fertel, Olivia Pratt, Mina Aasgaard (not pictured: Ben Rodi)
Board of Directors (back row): Patrick Cavanaugh, Julie Urbaniak, Steven Urbaniak, Kristin Froning (not pictured: Chuck Morgan)
We are a 501(c)(3) public charity.  As a public charity, we rely on contributions from the general public to fund our mission.  Donations to The Student Pantry are tax deductible.  Our tax identification number is 82-5166231.  We are proud to say that our leadership team is not compensated for their time spent on behalf of The Student Pantry, so almost 100% of our donations go directly into the operation of our Student Pantry sites.  If you have specific questions about making a donation, please contact us at finance@studentpantry.org.

Download File
We are a gold-level GuideStar participant, demonstrating our commitment to financial transparency.  Our profile can be viewed at https://www.guidestar.org/profile/82-5166231.

Sydney Urbaniak, Founder of The Student Pantry, Chairman of the Board of Directors and Youth Advisory Board
Sydney is a junior at Walled Lake Central High School. She began working to reduce student need in 2014 after noticing that not all students seemed to have the required school supplies.  Initially, Sydney and her parents donated the items needed through the Walnut Creek Counseling Office. Once Sydney understood how large the need truly was, she was determined to help all kids who might be struggling due to a lack of resources and The Student Pantry was born. In addition to her role on The Student Pantry, Sydney is a drum major in the Walled Lake Central Marching Band and plays the clarinet as a member of the pit orchestra for Walled Lake Central's musical productions of The Secret Garden and Sister Act. In her free time, Sydney enjoys traveling as well as spending time with friends and family.

Patrick Cavanaugh, Board Member
Pat Cavanaugh is honored to serve on the Board of Directors for the Student Pantry. Currently, Pat works for the Green Bay Packers as the Event Sales and Service Manager. Prior to working with the Packers, Pat was a school administrator for twelve years serving as the principal at Walnut Creek Middle School in West Bloomfield, Michigan as well as an elementary principal and middle school assistant principal in the Warren Consolidated School District. He also taught in the elementary and the middle school levels. Pat has held other service roles in the community including being on the Steering Committee for Blessings in a Backpack within Warren Consolidated Schools from 2012-2016 and was the Founder and Camp Director of a Free Youth Football Camp in Warren, Michigan from 2006-2011. On a personal level, Pat is married with four children (12, 10, 6, and 5 years old). He attended Saginaw Valley State University for his Bachelor of Arts (BA), University of Rochester (NY) for his Master’s of Science (MS), and Oakland University for his Educational Specialist (Ed.S.) and Doctor of Philosophy in Education (Ph.D.).  ​

Kristin Froning, Board Member
Mrs. Froning began teaching at Oakley Park Elementary in 1992. In 2003, she began her career in administration, serving as head teacher at Keith Elementary and Commerce Elementary; as well as interim assistant principal at Walnut Creek, and interim principal at Loon Lake. Mrs. Froning returned to Oakley Park in August of 2010 as principal. Mrs. Froning has a bachelors' degree in Elementary Education from Central Michigan; a master's degree in Literacy from Eastern Michigan University; and an Education Specialist degree from Oakland University. She is the consummate servant leader, collaborating with students, staff, parents, businesses and the community on behalf of children and public education. Mrs. Froning is a proud member of the Walled Schools community as both an educator and parent.

Charles Morgan, Board Member
Chuck Morgan is the principal at Walled Lake Central High School.  He has served in that capacity since 2010.  He has a bachelor’s degree in Business Administration from Ferris State University and earned his teaching certificate and a Master’s Degree in Educational Leadership from Eastern Michigan University.  Mr. Morgan spent seventeen years as a CTE (Career and Technical Education) teacher in Byron Area Schools, Birmingham Schools, and Walled Lake Consolidated Schools.  Prior to becoming principal at Walled Lake Central, Mr. Morgan was an assistant principal at Walled Lake Northern.  Mr. Morgan is married and has two sons and one daughter.​
​
Julie Urbaniak, Board Member
Julie, Sydney's mom, is a member of the Board of Directors and is a licensed attorney in the State of Michigan. She is thrilled to be supporting her daughter's efforts to reduce food insecurity in their community. Julie also supports The Student Pantry by acting as the President and Treasurer of the organization. She has served on her subdivision's board of directors since 2007 in addition to her roles as a PTA board member and other community-based volunteer activities.

Steven Urbaniak, Board Member
Steve, Sydney's dad, is a member of the Board of Directors and represents the Youth Advisory Board's positions concerning the day-to-day operation of The Student Pantry. Steve also supports The Student Pantry by acting as the Vice-President and Secretary of the organization. Steve volunteered for several years as a soccer coach as well as at PTA and other functions. Along with his wife Julie, Steve believes that small changes can make a big impact in the world.

Mina Aasgaard, Youth Advisory Board Member
Mina is a junior at Walled Lake Central High School. She plays flute in the Walled Lake Central Marching Band. When she is not doing something music related, she is probably reading or having fun with her friends and family. Last year she joined NJHS which lead her to helping the community in many ways. She is very excited to continue helping people through The Student Pantry and hopes it will grow to help people outside of her community.

Chloe Endreszl, Youth Advisory Board Member
Chloe, along with being a member of the Youth Advisory Board for The Student Pantry, frequently volunteers in her community. She enjoys helping kids learn through science and agriculture at The Tollgate Farms in Novi. She also helps Hospitality House every year with Santa Shop. In addition, Chloe enjoys playing Bass Clarinet in the Walled Lake Central Viking Bands. Chloe is a junior at Walled Lake Central. She hopes that by lending a helping hand, she will make the difference in her community and the world.

Nina Fertel, Youth Advisory Board Member
Nina is a junior at Walled Lake Central High School. Music is a very important part of her life. She plays the saxophone in the Walled Lake Central Marching Band and in the Walled Lake Central Jazz Band. She is a full time student, part time artist and huge theater fan. In her free time, Nina likes to spend time with her animals and loves to travel. As far back as she can remember, Nina and her family have volunteered throughout the community. Some of her favorite experiences were volunteering with preschoolers, at Hospitality House Food Pantry, and making craft items for donation and fundraising. Her involvement with the Student Pantry is very important to Nina. She believes that this wonderful organization is her opportunity to directly help the students and families in her hometown. She looks forward to many years of giving back to our amazing community.

Olivia Pratt, Youth Advisory Board Member
Olivia has been a member of the Youth Advisory Board of The Student Pantry since January 2018. She is currently a junior at Walled Lake Central High School, and has served the community in the past through outreach programs with The Girl Scouts of America. Olivia is excited to support the mission of The Student Pantry by helping students in need get access to the food, clothing, and school supplies. In her free time, Olivia enjoys playing the french horn, spending time with friends and family, and volunteering with the local hospice agency.

Ben Rodi, Youth Advisory Board Member
Ben Rodi is a junior at Walled Lake Central. Ben is very active in the Walled Lake Central music program. He is in several bands including the wind ensemble, jazz band, marching band, and pit orchestra. In his free time, Ben enjoys the outdoors; he has been hunting and fishing as long as he can remember. Ben also enjoys art and spending time on the boat. Ben looks forward to giving back to his community through this outstanding organization.